Home » Latest news » 'I knew there was a risk I could lose my sight, I just didn’t think it was going to happen to me’

'I knew there was a risk I could lose my sight, I just didn’t think it was going to happen to me’ 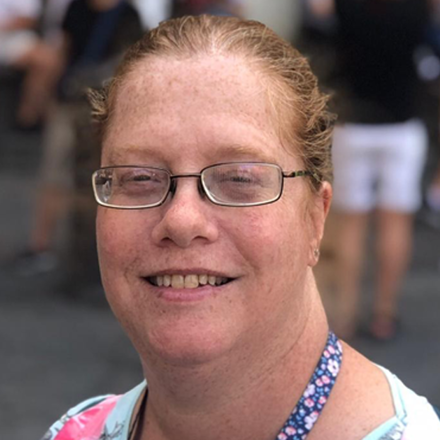 Berni was diagnosed with diabetic macular oedema (DMO) in 2011, soon after a visit to her opticians for a new pair of glasses.

“I’d had an OCT scan in the February and that was fine,” she said. “But, in the May I realised my sight wasn’t as good as it was. I just thought I needed new glasses. So, I went to my optician and she told me I needed to go to the hospital, where they told me I had DMO. I was really shocked. I did not expect it at all.”

DMO is the biggest cause of sight loss in diabetics. It is a complication of diabetic retinopathy and results in a condition very similar to wet age-related macular degeneration.

Berni said: “I knew with diabetes there was always the worry of having some complications with your eyes, or some form of sight loss, but I just didn’t think it was going to happen to me and I was really shocked when it did.”

When she received her diagnosis, Berni said she was terrified and did not know what the future would hold.

“I was told I’d need injections in my eyes and that sounded terrible,"she said. I remember shaking, I was so nervous about the thought of having injections. And, I was worried for my future. What was this going to mean as far as my independence? That’s what I started to worry about.”

Sadly, in 2012 Berni’s fears about losing her independence came true as she lost her job as a teacher and in 2013 had to give up her driving licence.

“Prior to losing my sight I loved going to work,” she said. “I wanted to be there until I retired. Leaving made me feel completely worthless. I cried every morning for four months, emotionally I found it very hard. It felt like being dropped from a great height.”

On World Diabetes Day (Saturday 14 November), Berni wants to share her story to help raise awareness of the condition and the importance of looking after your eyes.

She added: “For me and for many people, it is the one sense you don’t want to lose. For people with diabetes, it’s the one thing they absolutely dread.

“The one thing I wish I’d known before I was diagnosed was that having my sugar levels so high for a long time and then reducing them quite quickly was going to have such a negative impact on my eyes. If I had known that, I think I would have reduced them much slower, so my eyes had time to adjust.”

Over the years new drugs have been used to help those with DMO and research into the condition is continuing - bringing hope to people like Berni. Although Berni has had to make changes in her life she still enjoys doing a variety of activities, including talking to health care professionals and students about DMO.

For more information on diabietic macular oedema or how to look after your eyes, visit our website or contact our Advice and Information Service on 0300 3030 111.