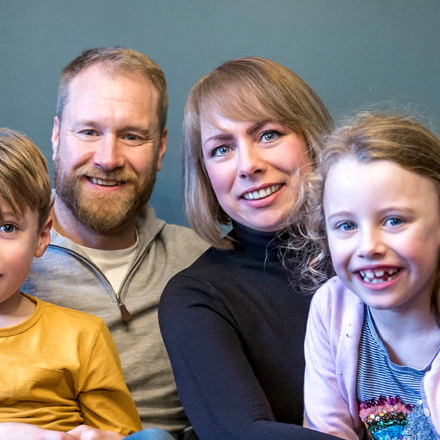 At the age of six, George suddenly lost interest in reading, started sitting close to the television and was no longer looking his parents in the eye.

At first they thought he was just playing up, but when his teacher at school noticed he had stopped recognising colours, alarm bells started to ring.

“It wasn’t until his teacher said that, that I thought something was wrong,” his mum Sarah said. “I had taught George his colours from a young age and he knew his colours so I took him to the opticians."

She added: “I then had this flashback in my memory thinking of all the things that had been happening over the last few months and suddenly it was really clear. He was getting closer and closer to the television and we thought that was normal and something children do, it’s something I used to do when I was a child.”

George went for an appointment at the opticians, where it was confirmed that he had pigmentation on his macula.

“I went home and went straight on the internet and thought it could be juvenile macular degeneration,” Sarah said.

“I waited for an appointment to come through and it was for eight weeks’ time. We couldn’t wait that long.”

The family called the Macular Society and were advised to take George to A&E and they soon received the devastating news that he had juvenile macular degeneration – later confirmed as Stargardt disease.

“It was like my world fell apart,” Sarah said. Because as a parent you do have hopes and dreams for your child, even at six-years-old. He wanted to be a plumber and all these things he’d said he wants to do when he gets older.

“On the first day of diagnosis he was already sight impaired. They certified him that day. And the consultant said “he will never drive”. Even something as small as driving, it just hits you like a massive weight. Since the diagnosis his sight has changed massively.”

George’s dad Ollie said they are now focusing on the immediate future and planning little trips and outings for him, while he still has some sight.

He said: “We are trying to plan as much with George at the moment and have a bit of a bucket list. We are just accelerating all the things that people do throughout their lives. We are going to create these memory boxes that we can pack with tactile things so when we talk about places we’ve visited he can touch tactile things. We have all these ideas, because he’s not going to have visual memories, he’s going to have other ways of remembering.”

George’s parents are keen to do everything they can to raise awareness and funds to help stop macular disease in its tracks.

Sarah said: “It would just be good to stop this from happening to other families. And, to stop it from being a problem in the first place, would be amazing. We have been through one hell of a time and if we could stop other families having to go through it, that would be great.”

Together, we can stop this from happening to any more families.