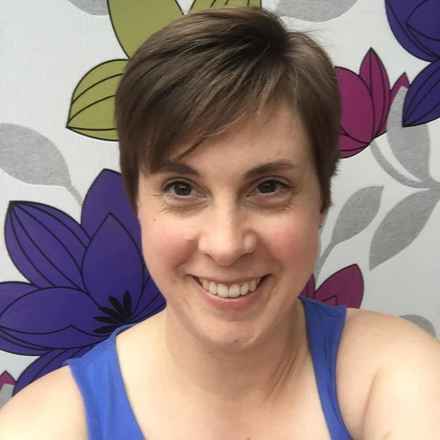 After years of going back and forth to the opticians and hospital eye clinic Louise was eventually diagnosed with Stargardt disease at 15 years old.

At the time she’d been working at a part time job, saving money for driving lessons and to buy her first car.

But, when she was given the devastating diagnosis she was told her sight was already too bad to get a licence and she knew she’d never get behind the wheel.

“That was the biggest thing for me I think, knowing that I’d never be able to drive,” she said.

“Even now, I’m 41 and it still really annoys me sometimes that I just haven’t got that ability to be spontaneous and independent and get in the car and go. I’ve got to sit down, I’ve got to plan bus routes or I have to ask someone if they will take me. I have to ask my mum or my husband.”

She added: “Sometimes if I want to go for a wander round the shops I want to do it by myself, I don’t want to be with somebody else. Sometimes you just want your own company just to have a wander about - in pre-COVID times. It’s just that lack and loss of independence.”

As a teenager Louise struggled to see the board at school, had to sit in front of the TV to watch anything or have books right at the end of her nose. But, no one could explain why.

She had no prescription and health care professionals had described her as ‘a bit of an enigma’.

Finally, after her parents insisted her consultant do further testing, she received a diagnosis of Stargardt – something she, nor her family, had ever heard of.

Louise said: “This was in 1994, when the internet was in its infancy, mobile phones were very rare, so it was impossible to find any information or support when the bombshell was dropped just before Christmas.

“My mum received a sheepish phone call from my consultant telling her ‘you were right, there is something wrong. Your daughter is going blind but there’s nothing we can do. We’ll see you in clinic in January, but have a lovely Christmas’.”

“Brutal and to the point.”

Despite living with the condition for 26 years, it is only now that Louise has been able to talk openly about her experiences and the impact of living with it has had.

She said: “It’s definitely been a process and a journey that I’ve been on. In the last couple of years I’ve come to an acceptance in my own head and it’s taken me a long, long time to get there. It wouldn’t be something I would talk about openly at all. So, for me it’s been a journey and a bit of a revelation.

“I’ve now accepted myself for who I am, instead of trying to be ‘normal’ and fit in. Sight loss is part of me and always will be, so I’m embracing it and enjoying the adventure of life!”

Louise now helps to raise awareness of sight loss and Stargardt disease on her Instagram page.