Wife campaigns for positive change in memory of late husband 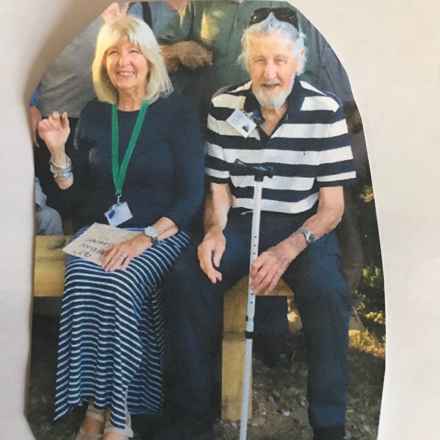 The wife of a late member of the Macular Society, who had dry age-related macular degeneration, is campaigning for better support for visually impaired patients in hospital.

Pegi Shove has been working with two of her local hospitals to improve support for people with sight loss who are admitted to hospital, after she believes her husband wasn’t given the support he needed.

She said those providing care to Paul, who sadly passed away last year, often assumed he had good sight, which left her husband vulnerable.

She said: “What I experienced in those 20 days of him in hospital was extremely distressing. A lot of his problems were because staff were not aware he could not see properly. Food wasn't being eaten and water was spilled on his bed clothes whilst trying to drink from a glass, which caused him to lose his dignity. He was also not able to use his mobile phone properly to talk to family.

She added: “The older generation often do not like to bother staff by asking for help.”

Pegi had taped a large yellow sign to the end of his bed to alert staff to his visual impairment.

Pegi says she wouldn’t want anyone else to experience what they did and has been talking with her local hospitals about providing a yellow wristband for all patients, to alert staff they have a visual impairment.

The yellow wristband is already used in many NHS hospitals and signifies a patient is a falls risk. Pegi believes its use could be extended to cover all patients with sight loss.

She said: “We cannot bring Paul back, but to make a positive from this and his suffering worthwhile we need something clear and effective to indicate someone has a visual impairment, so this is factored into their care.

“Patients with visual impairments deserve the same quality of care as everyone else, however, if no one knows they have a problem then the patient is extremely vulnerable.”

If you have experienced something similar to Pegi and her late husband Paul, or would support the use of a yellow wristband for hospital inpatients, we’d love to hear your views. Email us at stories@macularsociety.org.