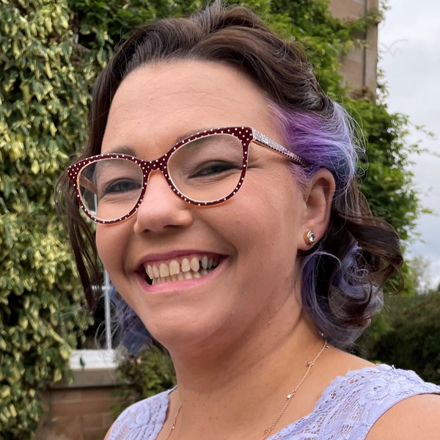 In September last year Shona was out having breakfast with her grandparents when she looked down at her food to see black dots everywhere.

The 32-year-old, who has type one diabetes, was later diagnosed with diabetic macular ischemia (DMI) – a complication of diabetic retinopathy.

Unfortunately, the condition has progressed quickly and, as well as not being able to do her job as a child’s nurse, she had to surrender her driving licence.

“I’d fought so hard to get my driving licence, because I used to suffer with seizures with my type 1 diabetes,” she said.

“Emotionally, it’s been really difficult, I think just because I have been so independent. With the complications I’ve had in the past with my diabetes, I was still able to live my life, whereas now I’m feeling that everything’s just taken off me and my career’s on the rocks as well.”

Shona has been speaking with a psychologist to help deal with the significant changes she was experienced since being diagnosed.

She said: “I think a lot of people my age kind of find support groups aren’t necessarily right for them, but, to be honest, and I’ve always said this, you can’t find any better support than from people who are living with the same kind of condition that you are.”

Shona, who has been part of a diabetes support group near West Lothian, said she gets a lot out of speaking to people that have got the same condition.

“I think just hearing their experiences, and obviously sharing yours, is vital for you to actually get past the stages that you go through when you get the condition. The grief, the anger and all the emotions."

She added: “It just helps you, and supports and guides you, to realise that there is a light at the end of the tunnel, that you can get past this, and that the condition isn’t everything about you; there’s so much more.”

But, since being diagnosed with DMI Shona has struggled to find others living with a similar condition.

The new group aims to connect people with diabetes-related sight loss, so they can share experiences of living with their condition, as well as hear about the latest in treatments and research.

The group was set up following the results of a survey of those living with DMO, where 50 per cent of respondents claimed they had not received useful information about the support available for their condition, upon diagnosis.

The meeting takes place on the third Wednesday of every month. The next meeting will take place on Wednesday 17 November October at 7pm. If you're interested in joining, email colin.daniels@macularsociety.org