"It could be life-changing for so many people" 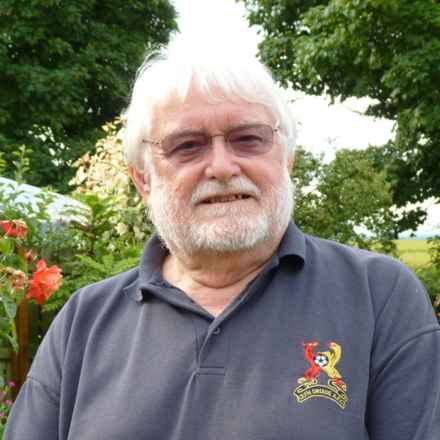 A 75-year-old man involved in a clinical trial for a new implant for wet age-related macular degeneration (AMD) says it would be ‘magic’ if the trial is successful.

Gareth was diagnosed with wet AMD in September last year and was selected to take part in the Velodrome trial, where a small, refillable eye implant is surgically implanted in the eye.

The device, which is slightly longer than a grain of rice, is uniquely designed to continuously deliver a specialised formulation of anti-VEGF drug Lucentis (ranibizumab) over a period of time.

Gareth said: “It sounds altruistic, but if I can help someone by being involved that is a good thing. It's a bit of a blow when you suddenly lose your sight in one eye.

“The whole point is it could last for months and if it does, that's great. Not having to go for a regular injection, which is invasive can only be a good thing. And, just the refilling of the port sounds a lot more practical and a lot more advantageous for everyone.

“It would be life changing for so many people. If it works it’ll be magic.”

Earlier results from the phase II trial in 2018 demonstrated that the majority of patients went six months or longer between implant of the device and the first required refill of the drug.

Gareth was keen to take part in the research to help others living with AMD and has encouraged others to do the same, so progress can be made faster. He said: “The quicker it happens the better it is for other people. I don't know much about macular degeneration research, but I suppose 10 years ago, they couldn't do anything and now they can, which is great progress.”

He added: “I worked in IT for years and when I first started, it sounds arrogant, but there wasn't an awful lot to know. But my team, when I retired 10 years ago, had so many specialists and it must be the same in medicine and medical science. Developments are taking place so rapidly now. The more of us who take part in research, the better it is for all of us.”

The National Institute for Health and Care Excellence (NICE) is due to start an appraisal of the port delivery system in October, in order to provide guidance to the NHS in England on the clinical and cost effectiveness of the treatment.

When Gareth was first diagnosed with AMD he said it was hard to stay positive.

He said: “It was a challenge not to feel depressed and sorry for myself because I realised that it could affect both eyes and that really would be a life-changing event. I quickly sought information on the Internet and came across the Macular Society and registered immediately. I found the information on AMD so helpful and was impressed by the support so readily available if needed.”

If you are interested in taking part in research, join the Macular Society’s Research Participant Database.