Q&A - your questions answered on the revolutionary bionic eye chip 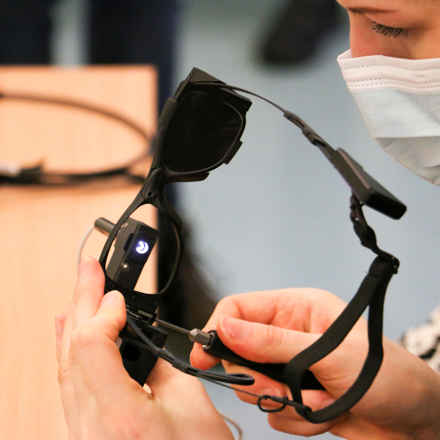 A patient with dry age-related macular degeneration (AMD) has been able to detect signals in her blind left eye thanks to a revolutionary new implant.

The Prima System is being trialled across Europe and hopes to partially replace the visual function for patients with dry AMD.

Here we answer your questions on the system and whether you could be eligible to take part in the clinical trial.

How does the Prima system work?

The Prima System consists of three elements; a wireless retinal implant, which is inserted under the patient's retina, a pair of glasses with a camera and digital projector, and a pocket processor.

The implant, captures the visual scene projected by the glasses and transmits this to the computer. Artificial intelligence (AI) algorithms process this information and instruct the glasses to focus on what it perceives to be the main object in the image. The glasses project this image as an infra-red beam through the eye to the chip, which converts this into an electrical signal. This signal passes through the retina cells and optical cells into the brain, where it is interpreted as if it were natural vision.

Who could the Prima system work for?

The Prima system is designed for anyone with advanced dry age-related macular degeneration (AMD) who is at the end-stages of the condition. In the ongoing PRIMAvera trial a visual acuity of 6/96or worse is required to take part (equivalent to 20/320 or logMAR 1.2).

Can the Prima system help people with other types of macular disease as well as dry AMD?

According to Pixium Vision, the Prima system could potentially help with all kinds of macular conditions, and retinal diseases where photoreceptors are degenerated, but the other nerve cells of the retina are still intact. However, it is currently only being trialled in patients with advanced dry AMD. If this trial is successful future trials will be needed to determine its effectiveness for other conditions.

What do the results show so far?

A multicentre trial has been running in France, Germany, Spain, The Netherlands and Italy and now in the UK. Initial results from an earlier feasibility trial have shown some patients able to read at least 10 more letters on the eye chart. While patients have not yet been able to read a book again, they have been able to recognise words and letters.

How widely could this be available?

As the device is still in its trial stages it remains unclear as to how effective it is and whether it will be made widely available.

How much will it cost and could it be available on the NHS?

Pricing of the device has not yet been defined. As the trial is still underway, it is unknown if it could be available on the NHS. There have been no other devices on the market previously and available on the NHS, but the company remains optimistic.

Can I get on a clinical trial?

Moorfields Eye Hospital is actively recruiting patients to take part in the PRIMAvera clinical trial in the UK. To be eligible to take part, you must have advanced dry AMD and have no central vision at all. You will most likely be registered severely sight impaired. To qualify, you must also have no previous history of wet AMD and be willing and able to attend regular rehabilitation appointments, as you adjust to using the system.

If I meet the criteria to take part in the trial, who do I contact?

If you have advanced dry AMD, with no history of wet AMD and are in good enough health to take part in a clinical trial, you can contact Mahi Muqit, consultant vitreoretinal surgeon at Moorfields at mahi.muqit1@nhs.net.

Alternatively, you can register your interest in research trials at Moorfields by signing up to research opportunities at https://research.moorfields.nhs.uk/