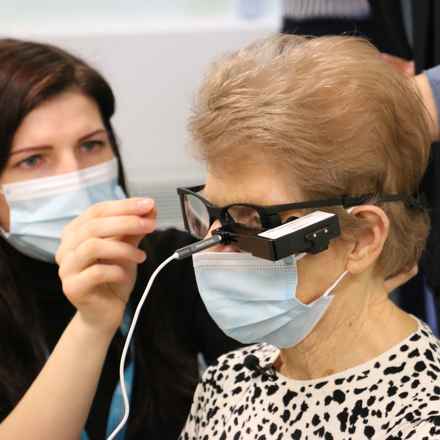 A patient with dry age-related macular degeneration (AMD) has been able to detect signals in her blind left eye thanks to a revolutionary new implant.

An 88-year-old has become the first UK patient to receive a new device which gives hope of partially restoring vision to people with dry AMD.

The successful procedure to insert the bionic visual aid took place at Moorfields Eye Hospital, as part of the PRIMAvera clinical trial.

The procedure involves inserting a 2mm wide microchip under the centre of a patient’s retina, by surgically creating a trapdoor into which the chip is posted. The patient then uses special glasses, containing a video camera that is connected to a small computer attached to their waistband.

The patient, who has seven children and eight grandchildren, said: “Losing the sight in my left eye through dry AMD has stopped me from doing the things I love, like gardening, playing indoor bowls and painting with watercolours. I am thrilled to be the first to have this implant, excited at the prospect of enjoying my hobbies again and I truly hope that many others will benefit from this too.”

The 88-year-old is one of 38 people across Europe taking part in the trial which is looking into the safety and benefits of the device known as the Prima System.

The system, which has been developed by Pixium Vision, is intended to partially replace the visual function of the eye’s photoreceptor cells, by electrically stimulating the nerve cells which transmit signals to the brain via the optic nerve.

It consists of three elements, a wireless retinal implant, a pair of glasses with a camera and digital projector, and a pocket processor.

The implant, captures the visual scene projected by the glasses and transmits this to the computer. Artificial intelligence (AI) algorithms process this information and instruct the glasses to focus on what it perceives to be the main object in the image. The glasses project this image as an infra-red beam through the eye to the chip, which converts this into an electrical signal. This signal passes through the retina cells and optical cells into the brain, where it is interpreted as if it were natural vision.

Four to six weeks after being inserted, this implant is tested by switching the chip on, and at this stage the patient should be able to see a signal. They then go through a rehabilitation programme to learn how to use the vision they have been given. After this, patients are potentially able to recognise words when they couldn’t before.

It is being trialled with patients who have lost their vision in an eye because of dry AMD, for which there is currently no treatment. It is estimated 12% of those over 80 will be affected by dry AMD, while the advanced stages of the condition affect 6.7% of over 80s.

Consultant ophthalmologist and cataract and vitreoretinal surgeon at Moorfields Eye Hospital, Mahi Muqit, said: "We are very proud to be part of the expansion of the PRIMAvera pivotal trial, and we are keen to help bringing this innovative system giving bionic vision to patients in need.”

For more information on the Prima System, or to find out if you are eligible to take part in the trial, read our Q&A.

Watch the video below to see how the Prima System works.