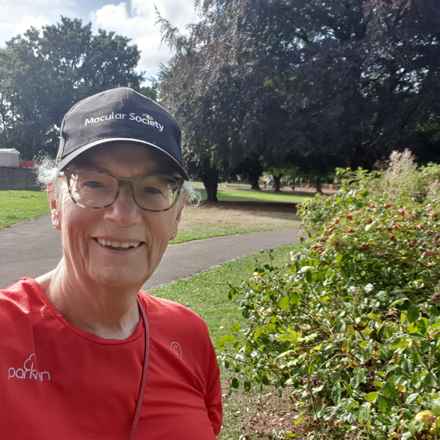 A runner has spoken of her “immense gratitude” after completing the 874-mile Land’s End to John O’Groats challenge, from home.

Sandra Orlando kept us updated of her daily runs through social media, which she completed between January and September.

Sandra, 75, has thanked everyone who donated to her challenge to support those living with macular disease, including people she has never met.

She said: “I have immense gratitude, so thank you. Some people have donated more than once and that’s what keeps you going. A lot of people I don’t even know have donated, they’ve just seen my posts on social media. It’s especially gratifying when you get donations from strangers.”

Sandra ran a few miles each day, around the streets and parks in her local town of Yeadon in Yorkshire. She began the challenge on New Year’s Day and completed it on 7 September.

Come rain or shine, Sandra put one foot in front of the other for her latest charity fundraising efforts, despite a few setbacks.

After completing the challenge, she said: “It was relief really. I started out intending to run the whole thing but after a few trips and falls it finished up as a walk. However, the hardest part was the blogging and asking for money. But I really wanted to raise money for the Macular Society, that was the real driving force.”

This was the latest of her running fundraisers, with 5Ks, 10Ks, half marathons and full marathons already in the bank since she first started running ten years ago. Over the years, Sandra has raised at least £10,000 for the Society.

Sandra said: “I was given 12 months to complete this challenge, so I was expecting it to take me through to the end of October so I finished quite a bit earlier than expected. The hardest part was sometimes just getting out the door but what gave me motivation was the fundraising, that was the impetus to put the running shoes on. It got me out in the fresh air and experience the local parks.”

Sandra was diagnosed with wet age-related macular degeneration a number of years ago and was group leader of her local support group in Bridlington before moving across Yorkshire. She has raised £339 from her latest challenge, adding to the thousands of pounds she has previously raised for the Society.

She said: “The Society has provided me with a lot of support and it’s comforting to know that help is there if I ever need it. I enjoy getting the magazine, seeing the latest developments and the support for everyone is brilliant.”

You can donate to Sandra’s JustGiving page.

Have you been inspired to take on your own fundraising challenge? Find out more about the ways you can help raise vital funds for the Macular Society.