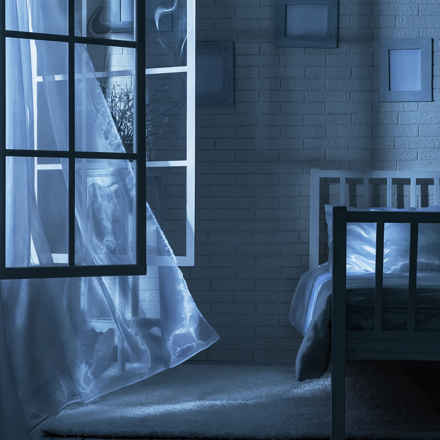 Angela Edwards had a lucky escape after jumping from her bedroom window after experiencing ‘terrifying’ visual hallucinations.

Angela, aged 61, was in the house on her own after her husband had taken their dog out for a walk.

While she was alone she started seeing people in her home, blocking every doorway.

She said: “They were everywhere and wouldn’t let me out. In the end, I opened up the window in my bedroom on the first floor of my house and jumped out. It was the only way to escape.”

Angela and her husband live next door to an army camp and once she was out of the house she asked if they could they call the police. But when her husband got home and searched the house, it became clear there was no one there.

Fortunately, Angela, who was diagnosed with age-related macular degeneration (AMD) last year, escaped with only a few bruises.

“I’m just so relieved I didn’t hurt myself but it was all so real,” she said. “I was convinced there were people in my house. When my husband got home it just wore off and there was obviously no one there.”

After Angela was diagnosed with AMD she had started attending one of the Macular Society’s telephone support groups. It was there she found out more about Charles Bonnet Syndrome, which causes visual hallucinations.

“Now when I look back it was so obvious this is what it was,” she said, “but at the time it just felt so real. It was terrifying.”

Charles Bonnet hallucinations can range from simple flashes of light, colours or shapes to more disturbing images such as disembodied faces and strange figures.

Up to half of all people with macular degeneration are thought to experience Charles Bonnet Syndrome at some time.

The Macular Society provides support to anyone experiencing Charles Bonnet Syndrome. For more information about our services, which includes telephone support groups for a chance to connect with others affected, contact our Advice and Information Service on 0300 3030 111.