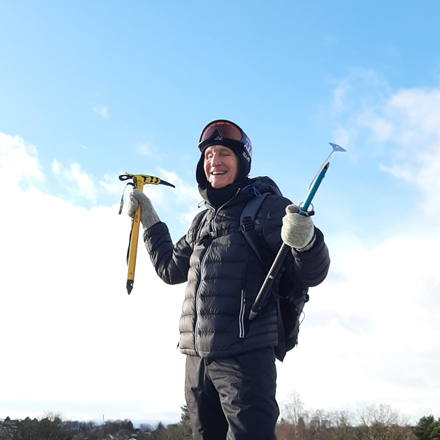 A former Macular Society regional manager has proven you do not need to leave home to take on a big challenge in 2021, after scaling the height of Mount Everest without stepping outside.

Jamie Cuthbertson, who retired from the Society in 2019, completed 526 ascents of the 91 stairs in his block of flats in January in order to climb the 8,849 metre height of the world’s tallest mountain.

The 60-year-old lost his sight in 1986, following an accident during service took on the challenge to raise vital funds for two of the charities closest to his heart - the Macular Society and Blind Veterans UK.

Talking about the challenge, he said: “What better way to start 2021 than by opening my front door and climbing Mount Everest - and coming back down again.”

While some days Jamie had to dig deep to find the motivation to keep going, he managed to complete his challenge three days ahead of schedule – completing 20 ascents of the 91 stairs every day.

He said: “Some days were a bit of a struggle. I knew I had to do a total of 526 to do the full height, so that was about 20 ascents a day. One thing that kept me going was knowing if I didn’t do them one day, then it was just going to have to add onto another day, which would make those other days a nightmare. So, I just had to get motivation from somewhere.”

To break up the 20 ascents every day, Jamie said he broke each ascent up into four blocks of five, including climbing two stairs at a time and alternating his speed.

“Breaking it up made the 20 ascents much more manageable mentally,” he said. “Not only did it make it easier to keep count, but it also broke up the monotony. When you start and you’ve only done a couple of ascents, but you’re huffing and puffing already and still have 17 more to do. Psychologically that‘s quite hard. “

Jamie said he is pleased to have completed the challenge. He added: “I feel fitter for having done it. I’m quite happy that it’s doing me good and I’m quite happy to do it because it was another thing to carry me through January. Plus, it was quite gratifying to see the money rolling in.”

He has been blown away by the support he has received and the generous donations and is now hoping to exceed £3,000.

He said: “Everyone has been so enormously generous. We beat the initial target within two days. I’m delighted to have raised so much for each of these great charities.”

It's not too late to support Jamie's challenge - visit his fundraising page.

If you'd like to take part in your our step challenge, find out about our newly launched Step Around the World.